For the building within the structure, the general contractor Ed. Züblin commissioned GIG Fassaden in Attnang with a contract of approx. EUR 9 million. Along with the engineering and construction of the atrium, the contract also includes the 1,200 m² mullion-transom façade along the ground floor as well as all inserted elements ranging from sliding and revolving doors to slats windows and aluminium doors and windows.

The eleven-storey building has been under construction on the 10,000 m2 site since October 2016, with two floors for parking, among other things, laid out underground. The media house, where the daily newspaper ”Die Welt“ is also based, is due to be ready for occupancy at the beginning of 2020. A virtual twin will facilitate facility management for the approximately 52,000 m2 of office space.

The Ed. Züblin is developing a BIM model for the client Axel Springer. ”GIG has been continuously supplying BIM data for this model,“ reports project manager Tino Hagendorf. The façade builder used the BIM-enabled 3D program Rhino for planning. ”The construction of the glass façade in the geometry of triangles, some of which are inverted inwards in relief or facetted outwards, was very elaborate, but a BIM working method was not used.“
The new Axel Springer building stands on the corner of Zimmer-, Schützen- and Jerusalem street on a historic site along the former strip of wall. Rem Koolhaas from the Office for Metropolitan Architecture (OMA) was awarded the contract for his design by a jury in spring 2014. The Dutch architect wants to support  the work of modern journalism spatially with the light-flooded building, with its floor areas which sometimes protrude into the building like terraces and which are connected by thirteen glass bridges. The atrium visually connects the five upper suspended floors with the ground floor and makes the publishing house’s hustle and bustle visible from all sides.

3,500 employees are to be motivated to achieve extraordinary performance through transparent room structures that promote cooperation and are specially designed for their activities. This goal is given cast-iron strength by the mighty cube, which is clad in grey tinted and printed glass panels in contrast to the glass triangles, and framed by white cover strips that catch the eye of passers-by.

On the dark south and west façades, the walls tear open from the centre in triangular shapes and provide a view of the glass façade. The glass surfaces’ two triangular baselines meet at the front across the corner. At this point, the façade reaches a height of about 46 m from the floor to the flat roof. Slender concrete columns stretching between the tapering triangular sides of the concrete walls underline the glass surface of approx. 3,200 m², which increases in size as it reaches the corner. While some interpret the view of the building on the glass façade as a wide-open mouth, others feel the cube‘s spacious opening invites them to examine the construction up close and to take a look inside the publishing house.

From a structural point of view, the atrium as a statically autonomous module is a highlight of the building. The glass façade has no expansion joints. In the connection points to the building structure, 64 specially developed bearings control the forces involved. The atrium is spanned in this way at a height of 42 m without further support. ”We juggled a lot in our 3D models to determine the exact points at which the bearings have to be fastened to the shell so that the necessary forces can be applied,“ says Hagendorf.

The bearings in seven different types can perform different structural functions: certain slide bearings absorb horizontal forces, others vertical. Hagendorf explains: ”With this special development by a bridge construction company, the constraints and forces in the construction are kept relatively small, as are the forces we introduce into the shell with the façade.“

Elaborate welding technology was used to connect the steel circulation beams of the façade, bridge bearings and brackets on the shell. The project manager explains: ”It became technically tricky, especially at the south-west corner of the glass façade, where due to special loads the structure had to be reinforced using plates due to the difficult geometry.”

GIG was fully responsible for the engineering of the atrium and commissioned the office of Thomas Lorenz in Graz with the structural calculations. Planning the façades in the geometry of triangles involved a lot of effort. ”None of the 1,552 glass panes on the south, west and east sides resembles any of the others,“ reports Hagendorf. The steel structure also has no repetitions, just like the top structure made of aluminium. The latter and the cover pressure strips for the glass façade – both components are special profiles – were manufactured at GIG in Attnang; the façade builder has the profiles individually manufactured by the extrusion company.

The Austrian façade constructor, which specialises in aluminium processing, commissioned a Greek company as the subcontractor for the steel construction. ”Our 3D data from Rhino was transferred by the steelworker to his Tekla program and used or prepared for the construction’s works planning in such a way that he could then upload it to his production machines.“ In addition to production, the Greeks also assembled the steel structure in Berlin. 270 tonnes of steel were used for the load-bearing façade construction. The steelworkers company assembled and welded the construction in a horizontal state in its workshop as a trial. After sandblasting and varnishing, the elements were brought to Berlin.

The steel structure was initially planned as both a structural member carrier and a frame for the glass. However, because steel exceeds the required tolerances in this application, a construction made of aluminium was used for accuracy and to compensate for uneven areas. The glass will be installed on site in the aluminium top construction with the help of cranes; the subcontractor is currently still in the process of carrying out the assembly work.

With regard to the degree of prefabrication, whether steel or aluminium elements, both the metal and steel construction departments took care to ensure that screwed joints were almost exclusively used on the construction site. ”After completion of the façade, the white painted steel construction (wet varnish RAL 9003, C3-M) is visible from the inside and the white powder-coated (RAL 9003 matt) cover pressure strips from the outside“, says Hagendorf.

Sealing of the façade

The development of the seal for the complex nodes in the glass façade was, of course, just as elaborate, and special seals were necessary. Sealing nodes were made as moulded parts using injection moulding. These were extruded and lie on the aluminium construction as a sealing level. The top construction rests directly on the steel construction. The external cover pressure strips are also provided with sealing strips for initial external protection.

The tests for tightness against water ingress, air permeability and wind load were carried out in Attnang on a prototype by experts from ift Rosenheim. The development of the sealing system was able to be optimised to meet the requirements in the course of preliminary tests. GIG has had two test boxes at its disposal for around twenty years to have façade elements tested by external testing institutes directly in front of the production halls.

The glass manufacturer was Guardian. The 1,552 different panes with a U-value of 1.0 W/m²K were delivered to the construction site just in time by the refiner Flachglas Wernberg. The Guardian SNX 60 panes have the following light-relevant values: g = 28%; light transmission 59%.

Depending on the installation position, the panes consist of: 5/6 VSG from float, 16 Chromatech Ultra F and 6 ESG-H and 6 ESG-H respectively; 16 Chromatech Ultra F and 6/5 VSG from float. The solar control glass is the only form of shading. Hagendorf reports that the client will wait to check the lighting conditions in the interior before providing further protection.

The large-scale scaffolding – temporarily used in structural function for the atrium until spring 2019 – is currently only required for access and will be gradually dismantled by summer, as soon as the south, east and west sides have been glazed and the cover pressure strips installed. By then GIG will have been busy with the project for four years. The façade builder submitted the initial bid for the atrium’s construction in 2015, and started on the construction site in Berlin in October 2018. 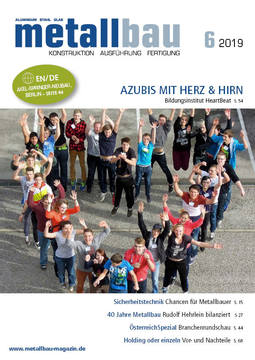