Too heavy for any crane

For the final elements to be moved again, both bridges have considerable dimensions: The northbound bridge measures 98 metres, is 13.23 metres wide, has a superstructure of 9.31 metres and weighs 2,900 tonnes; the southbound bridge is 120 m long and somewhat wider at 13.80 metres. However, its superstructure is 11.40 m due to the much larger span, and its weight totals 3,200 tonnes.

Since this weight could not be lifted by any crane in the world, a decision was made to drive in the bridges with self-propelled modular transporters (SPMT). The SPMTs are manufactured by the Ulm-based company Kamag Transporttechnik and are distributed worldwide. In this case, they were used by the service provider Sarens NV from Wolvertem in Belgium.

The „how“ of logistics ultimately formed the construction. Two simple truss bridges were therefore selected, the advantage of which is that the bridges can generally be raised below each nodal point of the bottom chord. This alone took into account strategic considerations for managing the perhaps 200 m long stretch to position the SPMTs under the bridges.

Both bridges are static simple span bridges, each resting on a rigid and a movable support. In the case of steel, a thermal expansion of 1 mm per linear meter of bridge is estimated; at the southbound bridge in Wilnsdorf this is at least 12 cm. This not inconsiderable expansion movement is closed by combing, i.e. clusters of mutually interlocking steel struts, with rubber profiles or with resting metal plates.

The bridge steel comes from the Saarland from Dillinger Hütte Saarstahl, and is processed and installed by Donges SteelTec. At the Darmstadt factory, the steel was precisely welded together to form hollow sections. The individual rod-shaped elements of the steel truss were then transported to the construction site as long goods with regular trucks. There, they were welded together on two field construction sites away from the traffic. Since there are no requirements for the two bridges in terms of fire protection, the hollow sections are neither filled nor provided with a special fire-resistant paint. The diagonal beams are connected to each other and to the bottom chord of the carriageway by two vertical panels aligned along the bridge with no visible welding seam. The entire construction period lasted from the demolition of the old bridges in November 2017 until July 2019. During this time, as a motorist, one could view the construction of the two new bridges taking shape.

While the entire bridge structure is made of steel and is connected to steel cross members, it is located on an in-situ concrete slab. The required boarding was introduced in a rough sawed variant by hand between the steel cross connectors in question and resulted in a concrete surface when viewed from below. Preference was given to in-situ concrete slab over the use of precast concrete parts in order to save on weight. Although the latter would have been able to be simply placed on cross members, a higher and therefore heavier steel reinforcement would have been required for these. The supporting structure with the carriageway slab is permanently connected with over 3,500 head studs, which are welded to the steel bottom chord and cast with the concrete. All concrete construction work was carried out by the Aschaffenburg construction company Adam Hörnig Baugesellschaft.

The 16 SPMTs each had 24 wheels, which are distributed on six axles with four individual wheels that can be rotated by 90°. Eight of the SPMTs were interconnected into one unit. They carried a large-format steel gantry, on which the bridge was positioned at a height of about 4 m, which largely corresponds to the final clearance height. Prior to the actual movement, both bridges were firstly hydraulically lifted with lifting devices. The lifting equipment functioned like a jack; it works with partial lifts of about 30 cm. Once this height has been reached, a support block is pushed in and another partial lift is carried out.

When the transport height has been reached, the described SPMTs were driven under the bridge, which were distributed over two large units with eight vehicles. Their manoeuvring was synchronised by two employees via radio remote controls. They were on foot, constantly controlling the progress of the bridge at walking pace between the units.

For logistics it was important that the SPMT moved on a uniform plane and that none of the wheels sank into unpaved ground. As a result of the total wheel count of 384, previous static calculations indicated that a single wheel load corresponded to that of a 40-tonne one and therefore no problems in the lane area were to be expected. However, the unsurfaced central reservation and the motorway hard shoulder in front of the bridge supports had to be prepared. These areas were largely covered with metal plates.

On the evening of Friday 19th July from 21:00, the first bridge was moved in. By midnight, the SPMTs completed a quadrant in which the bridge first passed through its future support axis, then trailing its rear end in a manoeuvring transverse motion until the bridge was parallel to its supports. This manoeuvre resembled parking in a tight parking space. Afterwards, all wheels were turned by 90° and the entire bridge was moved laterally transversely onto its supports. The final lowering of the bridge into its supports was in the reverse order to the stacking described above and took the rest of the night to complete. On Saturday, the SPMT were moved to the southbound bridge and moved in in the same way during the next night. Sunday was used to demolish the construction site, so that the motorway could be re-opened early on Monday morning .

Following the moving in of the bridges, they were almost finished. The crash barriers had already been fitted, through which a steel cable was also routed. In the event of an accident, it prevents a vehicle breaking through the crash barrier, since this distributes the impact load to the neighbouring delineator posts. Plexiglass discs were also fitted above the bridge railings. They act as a splash guard for the snowplough so that snow does not fall on the underlying motorway during winter clearing of the A-road. For Project Manager, Stefan Dienst, it is only a matter of time until these transparent panels are smeared with graffiti, but clear panels offer the cheapest product among all materials. In the case of damage, they are easily replaced.

Before the bridges are opened to traffic, their approach roads are to be rebuilt and the bridge surface will gain a double 3.5 cm thick asphalt surface. In addition, the slightly raised, lateral bridge hard shoulders are to be concreted. These are also connected to the steel structure via head studs.

The paint is off

Both bridges have a petrol blue metallic finish, which was applied with an airless paint spray system. Their dazzling shine results from microscopic metal plates, which are positioned undrilled on the surface as a result of spraying. Unfortunately, the painting company commissioned with the execution used the identical colour during the rework, but applied it with a roller. This resulted in a completely different reflection and the painted surfaces resembled a patchwork quilt. Since, however, in terms of corrosion protection this was not a defect and the colour was identical, it sparked a dispute over liability. Clarification was provided by examination of the tender text, which clearly stipulated a paint spraying system.

The two bridges are designed for a service life of 100 years; experts believe that they will be very low maintenance. Both previous bridges had central supports whose bearings had to be inspected every three years. For this purpose, a small construction site with lane narrowing had to be set up on each occasion. The two new constructions just have one roller bearing to be inspected. It is located in the eastern bridgeheads, which include a maintenance compartment for it.

If, in the distant future — the responsible Construction Department Head Harald Mank mentions for 40 years as an order of magnitude — the renovation of the bridges is still pending, then it would be possible to lift both bridges off the motorway and move them completely onto the main road. There you could then do the work without disrupting long-distance traffic. This is also possible due to the compact steel framework construction. 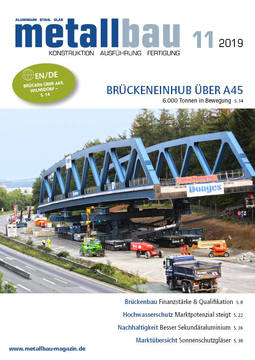 "Better to invest in bridges than road closures!"

metallbau: Mr. Dienst, how did the building project come about? Stefan Dienst: The two previous bridges were completed around the same time in 1966 and formed part of the early construction phase of...

No problems with heavyweight tasks