The city of Copenhagen has been eager for Copenhagen Tower II to become a landmark. Accordingly, the architectural office Foster + Partners designed a façade with two curved building sides, by order of Solstra, the building‘s owners. The convex façade, shaped like a polygon, was constructed and produced by Feldhaus Windows + Façades in Emsdetten, while the AMP Engineering Society in Neuss were in charge of planning the façade concept and quality assurance. ->photo gallery

The Copenhagen Tower II was erected by Solstra as an architectural highlight, near Copenhagen Airport and the Öresund Bridge, which connects Copenhagen to Malmö in Sweden. The curved façades have made the building project a figurehead for Denmark‘s cultural metropolis today. The tower is 87.5 m high and boasts a gross floor space of 20,000 sqm, the rental price is between 1,400 and 2,100 krone per square metre per year, plus additional expenses.

The end of 2015 saw the completion of a building complex, which includes Crowne Plaza Copenhagen Towers – one of the first climate-neutral hotels with one of the biggest photovoltaic façades. The Copenhagen Tower I was already ready for occupancy at the end of 2009, in time for the UN World Climate Conference, and building measures for Copenhagen Tower II were put on ice for the time being. “We had planned both towers and a conference building as a parallel unit, and the building project was then delayed as a result of the financial crisis,” reports Palle Sort, Solstra Head of Finance. The idea was to create an environmentally friendly hotel with conference buildings and a LEED-certified office tower in one area. “With this project, we wanted to create synergies for the companies hiring the building, as well as the hotel and its guests, which set a unique standard,” says Sort.

The post and mullion construction encompasses an area of around 13,000 square metres. Technicians installed the 1,100 aluminium and glass elements in only a year. Feldhaus‘ order amounted to €9 million.
The arch, which spans the building over its north and south sides, from the ground floor to the 21st floor, is marked by five curved bare brickwork supports on the exterior. It is placed in front of the heads, with an axial dimension of 6 m. The supports are insulated on the exterior, and clad in rear-ventilated stainless steel plates. The heat façade between the supports has been designed as a partly transparent, floor-high elemental façade. The façade arch is at its widest at the height of the 13th storey; this floor has the most surface area.
“We achieved the curve of the post and mullion façade over a height of nearly 90 m through a polygonal arrangement in the area of the vertical unit joint – the components are smooth and even,” explains Stefan Sandmann, the Feldhaus COO who is in charge of the technical side of the project. The angles vary from floor to floor. “The formats of the window elements are different for each storey,” Palle Sort emphasises. In the lower floors, the maximum inclination is minus 9 degrees vertically. The elements are arranged vertically up until the 13th floor, and have a reverse inclination from the 14th floor to the attic. At the highest floors, the elements have a 5 degree inclination inwards.

Feldhaus collaborated with Wicona and Saint Gobain Glass in the building of the façades. The Wictec EL 60 standard system was redeveloped for the element frames as a special construction, with an overall depth of 329 mm. The exterior of the profile was anodised in black, in E6 C35. As the site is near the coast, and subsequently, salty air, the construction was protected from corrosion with an anodised layer, with a minimum of 25 µ. The Triple Insulating glass is a combination of the Saint Gobain Planiclear pane type, Cool-Lite SKN and Planitherm Ultra N. Planiclear was introduced to the market in autumn 2014, and this glass helped reduce the demand for artificial lighting due to its colour neutrality and high level of transparency. “The LED lighting in the offices adjusts itself automatically. Light sensors are installed in all the rooms so that artificial light and daylight are exactly attuned to each other,” reports Sort. The pane set-up of the façade elements varies partly according to point of the compass and storey. On the 12th storey, the following pane set-up was used for the windows on the north façade:

On the exterior, mirrored safety glass units with colour adjusted to fit the insulation glass units were inserted into the opaque panel area of the element, in order to give the appearance of a curtain wall. Laminated Safety Glass made of 2 x 6 mm Heat Strengthened Glass, with ceramic print in RAL 7021, were installed as panes.
The façade elements were produced in the factory with a prefabrication grade of 90 % – including suspension, drainage and insulation. Film protection was used to prevent damage to the panes. A logistics concept was essential for organising the integration of the various formats. All elements had to be ordered in the exact positions. “On the building site, we directly mounted the elements onto the structure; all we had left to do was fix the horizontal saddle seal and mask the lines to the structure,” reports Sandmann. Façade builders were tasked with assembling the structure in Copenhagen; technicians were recruited via a subcontractor.
The transparent standard elements are about 3.6 m high and weigh about 800 kg. The Triple Insulation Glass involves a sun protection glass with a G value of 31 %, a light transmission of 54 % and a Ug value of 0.6 W/m²K. The pane combination of Planitherm with Planiclear offers excellent thermal insulation, and perfectly insulated the inner space against cold and drafts. The combination of Planiclear and Cool Lite offers protection from the sun, and lowers the level of heat in the room. An interior-lying screen deals with glare protection. Geothermy was installed in order to acclimatise the rooms. Ground water had been a major annoyance for eight years. Sort remembers: “From 2006 to 2014, we had to pump out the ground water to prevent the hotel‘s underground parking system and the Copenhagen Tower II basement from being flooded.” A 100 m deep system was used to pump out the water, and used for both heating and cooling. The radiators have been hidden from view beneath the windowsills, behind a cover; a cooling system in the ceiling helps to make the temperature more comfortable in hot weather.

Elements with a flexible G value

The view of Copenhagen and the coast from the 21st storey is immense, and the public have access to views of the island. Beneath the roof, a restaurant has been built over two floors, and the façade elements are transparent over a height of 8.6 m. Micro Shade has been integrated into part of these large-sized panels. “It involves a transparent, micro-perforated system in the space between the panes, which adapts the G value depending on the position of the sun,” Sort explains. The maintenance-free system filters sunlight like external shutters.
In order to remove the wind load of the elements, which weigh up to 4 tons, the aluminium profiles were reinforced, and an additional horizontal steel construction was incorporated into the space. The girders are at half the height of the attic, and were installed for the restaurant on an open second level,“ Sandmann states.
At heights of around 75 m, where the winds are strong, technicians had to wait for calm periods, so that they could incorporate the heavy elements into the 20th floor using tower cranes. By the sea, where a breeze is constantly blowing, it can be a very trying task – work was constantly interrupted for periods of several days. “In projects like this, you have to plan early on for potential challenges resulting from weather conditions. Luckily, we managed to carry out our building work and get on top of things in only a year,” Sandmann states.

An atrium connects the towers

The atrium is not only a corridor from Tower I to Tower II, but is also used by office workers as a canteen at the same time. With a small forest, it offers a new feeling of space from an architectural point of view. There are 60 trees underneath the skylight. The Shady Ladies (Bucida Buceras) from Florida grow up to 9 m high – the shrubs, (Polyscias filicifolia), with 4,500 leaves, grow up to 2.5 m. The greenery requires a specific ventilation concept, and an engineering firm calculated the costs. “The workers like to sit alone under the trees between the shrubs for a while, and catch their breath”, says Sort.
The gardener ensures that there is room air in the green area. With 450 to 800 ppm, the carbon dioxide content of the air is no different to that of the streets. The CO2 value is just one of many parameters which are scanned by a variety of sensors on a Siemens CTS system, and are controlled by the central building automation in order to keep to defined target values. For example, the window elements can also be automatically opened and closed by the Siemens CTS system. Sort states that the in-house technology is not managed centrally from one room; rather, it is managed virtually by an app.
Feldhaus selected the Raico steel profile system, the Therm +56 aluminium system, and Triple Insulation Glass for the skylights. The panes are composed of 12 mm Laminated Safety Glass with 4 PVB films (interior), 6 mm Toughened Safety Glass (centre), and 8 mm Toughened Safety Glass with SI film (exterior). These elements were also planned in three dimensions; Sandmann reports: “The cross-section of the skylights is shaped like an arch, and the ground plan is uneven. A three-dimensional view of the construction was needed, because different seal levels had to be joined together in the joint area – a different type for each joint, in fact.

The Copenhagen Towers building ensemble has become an imposing landmark. Eyes everywhere are fixed on a skyscraper with a façade shaped like an arch, all the way from the lakeside to the inbound E20 motorway.
With its generous amount of greenery, the atrium conveys an extraordinary experience of space, which is a complete novelty for most of the hotel guests. In contrast to the surrounding businesses, the leafy oasis offers a safe haven for small breaks for the potential 1,500 people passing through the area. Sustainable small touches also contribute to the atmosphere of the atrium, such as wavy blankets made from recycled plastic bottles, which absorb sound and improve the canteen‘s acoustics, or the walls, which are clad with recycled window frames and floorboards. The restaurant on the 20th floor gives the public access to the building; “Denmark‘s fastest lift” brings visitors to this 80 m high space in a matter of seconds. 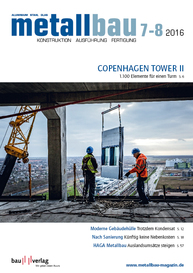