„We’re not really building façades anymore; we’re almost building machines“, Markus Überbacher, technical manager at Frener & Reifer, says about his work. In fact about two years ago, London-based Orms architects asked the South Tyrolean company if they could build a 10-metre-high façade with pivoted elements. It was for a new construction project, located just off the Tottenham Court Road underground station in central London, named after the St Giles Circus intersection. Senior director Franz Reifer did not limit himself to just one offer: he developed the idea further and also offered to construct a louvre-type opening mechanism that would also allow the elements to be completely moved to the side. Since St Giles Circus is home to retail and event venues, and office space and apartments are tightly packed into four new buildings, this approach was of great benefit to the architects.

Markus Überbacher sees parallels with vehicle construction in the production of the portals, except that there are only 24 gates and therefore there is no mass production. Just like in vehicle construction, however, it is important to create a precise workpiece with a perfect surface under workshop conditions with the maximum use of machinery, which would not be possible to produce on site.

The movable façade elements consist of a supporting frame precisely assembled on a straightening bench, then hot-dip galvanized and finally varnished in black. Afterwards, all façade elements received their technical infrastructure in the factory. This consists of the installation of an internal mechanical linkage and a specially developed large gearbox controlled by high-performance, almost noiseless electric motors. An appropriate power supply is routed through an internal wiring harness.

9 of the 24 total façade portals close the main façade on Tottenham Court Road, and these are the portals that can be moved aside. Their mechanics consist of a hollow shaft, inside which there is a second shaft that runs independently of the first. One controls the turning, the other the action.

The areas of the portal that are not required to accommodate the mechanism were filled with 9 mm thick laminated safety glass. Insulating glass was not used here: the panes are secured using silicone as an adhesive. The gate elements have large threads on the head and sill for securing the transport lock and as eyelet holders for crane installation on site.

Precisely fitting steel frames were manufactured especially for the transport of these portals to protect them from manufacture to final assembly. The transport and installation on site was carried out following a fixed procedure:

All the portals were transported by lorry from Brixen to London standing upright on their long edge. They were sent four to a trailer; the complete vehicle was loaded onto a train on the French side of the English Channel, driven as a unit through the Tunnel and then, once in England, made its way to the construction site under its own power again. Due to a lack of suitable storage space, the portals were installed almost directly from the vehicle.

The first step was to set them down on the ground, still lying in the securing frame. Subsequently, the upper part of the transport lock was removed and mounted on a hinged installation tool with a heavy concrete base, specially created for the auxiliary threads at the bottom. This prevented the lower edge of each portal from scraping or scratching the floor while it was being erected. As soon as the façade wing was vertical, it was separated from the hinged foot while suspended by the crane, and lifted into its „door hinge“. In the case of the laterally movable elements, this is a flat carriage which travels in a large groove in the door threshold. This has a large, cylindrical space in its centre, into which the door drive shaft is inserted.

„Nowadays, heavy loads aren’t a logistical problem; the big challenge at the moment is that we sometimes have to logistically manage 40,000 − 60,000 individual parts in a project,“ explains Frank Osanna, Head of Logistics at Frener & Reifer. These are not so much the elements that are actually visible at the end as the countless small parts, such as bolts, sheet metal, spacers, gaskets and insulation. Screws, he admits, aren’t so much of a problem as they are available everywhere. His conclusion: „We always know where the big parts are, but a small one can sometimes get lost. But that’s what can stop a million-dollar project at short notice!“

Large projects in London are a challenge. Lorries are only allowed to drive in and out at certain times and have to register this with the city beforehand to get their own time window. In addition, the vehicles must have a FORS certificate, a three-level rating to increase the safety of cyclists. Underride guards, a blind spot mirror, and in some instances rear-view cameras and special training for drivers are required. However, the vehicles do not have to be adapted to British left-hand traffic. For this reason, Frener & Reifer works with a continental European forwarding agent whose vehicles and drivers have the appropriate licences.

But the company with approx. 250 employees, which emerged in the 1970s from a small metalworking shop with two bosses and one employee, is now implementing projects across the world. One of their most prominent buildings is the Steve Jobs Theater, the huge auditorium and events venue at Apple‘s corporate headquarters in Cupertino, California. The circular structure consists of an 8 m high ring of individual curved glass panes each 2.70 m long. A carbon disk measuring 47 m in diameter and weighing 80 t sits directly on the panes, of which there are 44 in total – without a frame, mount or fixation. The disk is made up of 44 ‘pie segments’ to match the number of glass panes. These were manufactured by Premier Composite Technologies (PCT) in the UAE and shipped by sea to California. They were carefully assembled next to the construction site and lifted onto the glass ring in a single hoist by a heavy-duty crane.

In Munich, the company was involved in the construction of the ESO Supernova, the European Southern Observatory’s planetarium and visitor centre in Garching, which opened in 2018. Here it created the central skylight, the „star roof“ with a diameter of 17 m. This consists of irregular triangles with spotlights where they intersect. When viewed from below, these represent the southern sky’s constellations. In order to maintain the overall impression the components, none of which resembled the other, needed to have a high degree of dimensional precision. All the parts were also assembled for testing purposes at the Brixen factory in order to check their consistency. After completion at the factory, the skylight was dismantled for transport to Munich and, much like the Steve Jobs Theater, was assembled next to the construction site and mounted in a single hoist too.

Logistics sometimes means making the impossible possible. In recent years, Frener & Reifer has carried out repeated commissions for internationally renowned architects. Many of them are regular customers today, including Sir Norman Foster. In 2017, he commissioned a special glass façade for the Madrid branch of his architecture foundation, including a 5.40 m x 2.70 m reversible pivot door, which was raised above a three-storey building and then precisely threaded between a 2.5 m wide chasm in the structure and mounted there. The planning phase was interesting and very exciting: Since this was his personal project, the famous architect and owner of a large office did not hesitate to travel to Brixen to spend several hours developing the technical details of the façade and the reversible pivot door with senior director Franz Reifer – who happens to be the same age as him. „The meeting came as a surprise for us!“ recalls Josefine Tinkhauser, who is responsible for Design and Marketing. 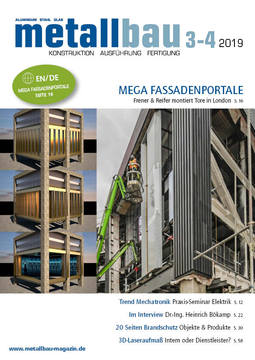