Work on the Marburg University Library was completed in summer 2018. Darmstadt-based firm sinning architekten has developed a building that, despite its considerable floorplan, doesn’t stand out from its surroundings. Instead it integrates harmoniously into its surroundings, yet can still be experienced as a unique building.

The university’s books are housed on Pilgrimsteig, a street located at the base of the steep hill to the medieval old town. From here, the terrain falls away again to the east by a height of more than one storey. The new building is situated along this fall line, so its west wing has four storeys while its east wing only has three. A glazed walkway – the “atrium” – lies between the two building sections, providing access to the building. This also acts as a semi-public path through the new building, providing a pedestrian route between St. Elizabeth’s Church and the Botanical Garden.

The façade is clad with fibre cement panels, in colours coordinated with the surroundings. The external elements are in three different shades of beige, reflecting the plastered surfaces of the surrounding baroque buildings; the atrium is in three different shades of red, creating a link to the sandstone. Both the gothic cathedral to the north and the classical Schäfer building on the south side of the library are made from sandstone.

LAP – Leonhardt, Andrä und Partner – the engineering firm tasked with structural planning, calls its calculation approach a “translation façade”. The need for curved glass surfaces in the upwards-curving roof had to be completely avoided, so a special design solution was needed.

The answer was a roof structure consisting of curved steel beams and girders, but this needed to enclose sufficient rectangular openings that could be closed with flat panes of glass. Slight parallelograms were acceptable, but triangular openings generally needed to be avoided. The top priority was the use of flat panes, as a curved design would have exceeded budget constraints.

The solution developed by the structural engineers at LAP was therefore based on a central ideal line along the centre line of the walkway. This is deformed depending on the position in the three-dimensional roof. The line was duplicated and moved to the side, running parallel. The duplicates were adjusted to the outer curve of the roof, but this deformation only ever occurred at the intersections in the grid. In this way, a curve was eventually reproduced with a polygon – a double cambered surface was broken down into parallelograms so as to keep the individual surfaces flat. The panes used throughout the design are rectangular, as the deviation of the opening angle of the spaces in the steel structure was so small that it mostly fell within structural tolerances and the resulting imperfections in the fit were compensated for in the glass supports.

Unlike in a façade using a conventional post and beam structure, the panes of glass are not fitted between the grid of steel beams and girders. Instead, the glass is placed on top and permanently bonded to the structure using silicone sealant. Assembly was performed using the Roschmann system. The sealing layer consists of a 20 mm-thick sealing profile. The custom-made panes were placed on the sealing profile and bolted to the steel structure with suction plates. The weight of the glass was theoretically calculated based on the 3D model. Sealing joints/silicone joints measuring around 2 cm in thickness are arranged between the panes. Although glass is a brittle material, the panes have a certain amount of flexibility. In this respect, the flat glass takes on the slightly curved form of the supporting structure without any problems. Only in very few highly curved areas was it necessary to pull them into the seal with the clamping plates. The edges of the panes were also permanently sealed with silicone. Since silicone – black silicone in this case – only hardens to a certain depth, a tube profile was first positioned underneath the approximately 42 mm-deep joint to provide ventilation.

In this rebate area, the façade construction has a second drainage level. Condensate can be drained away in a clean and controlled manner. Michael Skopp, technical manager at Roschmann, has already seen this second sealing level working perfectly, as the final silicone was only added at the very end, but the atrium remained protected from the rain throughout the construction period.

The entire substructure of the roof was prefabricated at the facility in Gersthofen, transported to Marburg and welded together there. The LAP engineers had originally planned for the roof of the walkway to be made from individual panels of glass, joined together, but it was ultimately constructed from continuous steel beams. The grid on which the glass for the roof lies was prefabricated as long “ladders” at the facility in Gersthofen and welded together on site in Marburg. Michael Skopp explains that the finished roof structure is a single, welded unit. There are floating and movement points and connecting joints with adjacent components, but all of the vertical and horizontal elements are connected, which is also an advantage in terms of longitudinal bracing. There is no need to fear damaging, thermal expansion, as the atrium is a single unheated room. Natural ventilation provides a relatively balanced indoor climate.

The outer edge is a box girder on a row of 22 m-tall columns, which are positioned almost a metre behind the glass façade. Its counterpart on the building side sits on the exposed ceiling of the adjacent wing. It was aligned on bearings that could be adjusted in all three axes. Adjustable supports also sit between the foundations and the long columns.

The box girder running along the side of the roof surface consists of 30-mm thick sheet metal arranged in a U shape. The upper section also features a U-shaped gutter to provide drainage from the roof and into which water or condensate from the rebate areas can also be drained, as already described.

As a result of the extensive welding work, particular attention had to be paid to the testing of weld shrinkage and compensation. Shrinkage and warpage were kept to a minimum mainly by using experienced installers, who really knew how to handle the flame. At the height of construction, especially during the phase involving positioning of the steel structure, around 15 people were assigned by the faÇade construction company to work on site at the same time.

The structural engineers at LAP entrusted with the overall structural analysis for the Marburg University Library initially planned to use larger, bolted junctions between the individual steel sections, but the planners at Roschmann impressed with their own junction design. They created a full-size model joint, weighing around 30 kg, which Michael Skopp single-handedly dragged into the site office in order to present it to the architects. Using the model, he demonstrated not only the more streamlined joints, but also ran through the roof assembly process in accordance with the Roschmann system.

The roof covering does not have a smoke and heat exhaust (SHE) system, and is instead equipped with natural smoke ventilation. The natural air conditioning in the atrium relies on a chimney effect: In addition to the smoke ventilation system mentioned, there are ventilation openings near the ground and air vents in the eaves. The effect is remarkable: Even in the height of summer the climate in the atrium is very pleasant and largely free of draughts. 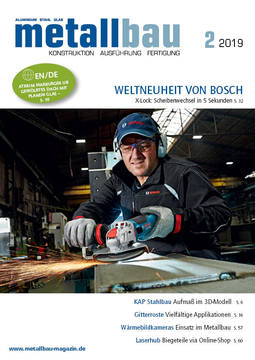 Welding of S355M/ML with and without preheating

If the general requirements for welding steels as per DIN EN 1011-2 are observed, thermomechanical fine grain structural steels are just as or even better suited to welding than unalloyed structural...

Steel bells as a hall construction

Arnhem is a major transport hub for the Netherlands. The city is located on the Old Rhine on the railway line between Amsterdam and Cologne. As early as 1845 a first stop was established here, with...

Steel grades for building of halls