The head office of the Chamber of Industry and Commerce for Munich and Upper Bavaria, located right on the Altstadtring in the Munich district of Maxvorstadt, is a major urban landmark. It consists of two listed buildings enclosing a covered inner courtyard: the building of the former stock ex-change at No. 8 Maximiliansplatz (architect Friedrich von Thiersch, built in 1901) and the residential and commercial building at 2 Max-Joseph-Strasse (architect Gabriel von Seidl, built in 1911). Both buildings have been rebuilt several times over the years and adapted to changing requirements.

But in order to ensure that it could continue to be used as an office building and meeting place in the future, a general refurbishment was now essential: the building structure showed considerable deficits in the areas of load-bearing capacity, fire protection, building physics and last but not least with regard to building laws. The structural upgrading would include connecting the buildings, which are structurally separated by a fire wall, to each other horizontally floor by floor. Another renovation aim was to restore the listed ensemble’s once prestigious appearance.

All in all an equally ambitious and complex project, whose implementation was not entirely smooth. The Berlin-based Anderhalten Architekten was able to win the Award of Public Contracts (VgV) procedure after the IHK opted not to continue with the previous planner. They were actually supposed to build on this existing planning, but instead of simply continuing to build, Prof. Claus Anderhalten and his team presented a preliminary design that rearranged the functional relationships.  „Basically, we have zoned the building,“ explains Wolfgang Schöning, partner at Anderhalten Architekten. „We have two public areas with a lot of public traffic, in which the building should be as transparent as possible, and a compact core that draws together the serving rooms as well as the vertical access. With this in mind, we have repositioned the lifts and optimised the horizontal access as well.”

Visitors, event participants and guests can reach the IHK via the main entrance at Max-Joseph-Straße; the side entrance at Maximiliansplatz is reserved for people attending VIP events. A further side entrance, for employees and deliveries, is located on Ottostraße. The public areas such as consultation zones and the Börsencafé are arranged on the ground floor. Functions are separated spatially by steel and glass partitions and doors. „We wanted to create the greatest possible permeability,“ explains Schöning, „so that the building can be experienced in its full splendour again.“ The atrium on the ground floor as well as the prestigious rooms on the 1st and 2nd floors of the former stock exchange serve as meeting rooms.  All other areas on the upper floors are used as offices and meeting rooms. Following the refurbishment, they are connected on each floor by a circular corridor that runs around the atrium. Because this circular corridor is an essential escape route to the stairwells, transparent fire doors close off the corridors. They were manufactured as EI30 doors with closing sequence control and panic locks; during normal business operation these doors remain open to impair the employees as little as possible.

As little interference as possible applies to the outside, although in a different sense. The historical façades with numerous natural stone elements, terracotta and various decorative elements have been carefully restored. Preserved historical window and door elements were reworked and completed where necessary; all other opening elements were reconstructed in a contemporary design based on historical examples. For this, the architects chose the thermally insulated Janisol steel profile system from Schüco Jansen.

The ground-floor windows were designed to imitate the construction period and manufactured as a thermally insulated steel frame construction with insulating glazing and increased safety requirements (RC2). In addition to various functional adaptations – such as crosspieces that keep the sun blinds windresistant and additional weatherboards – a 15 x 30 mm narrow steel bridge was retrofitted on the outside for aesthetic reasons. „We want to diversify the view even more with this steel bridge,“ explains Schöning. „As a result, the steel profiles appear narrower overall, thus coming even closer to the original profile and supporting our aim of restoring the building to the way the architects had built it at the time.“

The production of the floor-to-ceiling, semi-circular arched windows on Max-Joseph-Strasse was a great challenge for the Gardelegen based steel constructor Niebuhr Stahlglastechnik; these windows are provided with a ‘twisted’ glazing bead. The two frame elements – a rectangular lower part and a semi-circular curved upper part – are linked together at their joint. But while in the lower part the glazing bead is on the inside, in the upper part it is on the outside. This was essential to maintain the water-bearing layer. In view of such refinements, equipping the windows with SHEV drives inside seems almost standard. However, this is only possible with a straight-edged profile, as is the case with the windows facing Maximiliansplatz. Here a small „moon“ at the window corners simply contours the otherwise rectangular shape.

What appears pleasing in appearance is demanding in production: the manufacture of such a window element, from the raw rod to the construction, takes almost a whole working week. The result certainly justifies the effort. „Of the basic options for attaching a SHEV motor, integration into the profile is not only the most elaborate but also the most elegant,“ so Michael Niebuhr, CEO of Niebuhr Stahlglastechnik. „Yet the sophisticated constructions serve a purpose: maximum transparency.“ This should also please monument conservators as there is no intrusive element to impair the view.

In February 2019, all of the 275 employees had moved into new workplaces in the IHK. It goes without saying that these are equipped with the latest technology. „The building meets the standards of a modern office building, implemented in a structure that is over a hundred years old,“ sums up Schöning. 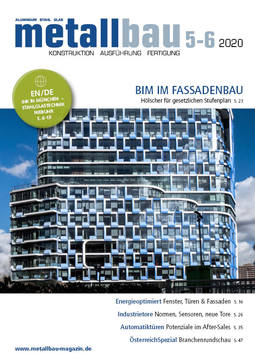 The fire protection specialists from Gardelegen

Projects with an order volume of up to  4,5 million cannot be managed by the around 85 employees at the headquarters in Gardelegen alone. Thats why Niebuhr works with three permanently employed...

Icon in white at Breitscheidplatz

The 119 metre high Upper West tower at Breitscheidplatz, Berlin represents a new angle on urban development  despite its sinuous white curves. The building is expected to be complete by the summer;...