Before the current renovation works, all levels had circular access balconies, which served exclusively as emergency exits and were not accessible from the fully air-conditioned patient rooms located directly behind them. It was also not possible to open any windows, nor was there any external sun protection. For many years, all these factors have been a source of annoyance both for the staff working there and for the patients.

Eventually, in 2013, an architects’ competition for the renovation of the hospital was held, with Berlin-based architects Kleihues+Kleihues emerging as winners. Their design planned to do away with the emergency exit balconies and add the extra space to the patient rooms, in order to make these significantly more spacious. Although all rooms would continue to be air-conditioned, it would now also be possible to open new internal windows, so that the rooms could also be naturally ventilated by ventilation grilles in the external façade.

To put their ambitious façade design into practice, the architects turned to Cologne-based engineers DS-Plan-Ingenieurgesellschaft für ganzheitliche Bauberatung und Generalfachplanung, a spin-off company of Drees & Sommer SE, the well-known engineering company from Stuttgart. DS-Plan specialises in renovating large structures and offers special consulting services that lie outside the German government’s fee structure for architects and engineers (HOAI). Their authorised representative Jürgen Einck sees his company as a service provider for architects and not as their competitor.

He quickly identifies the new façade weight as a key issue for all outer shell renovations and explains that it’s a mistake to assume that the building is usually favourably dimensioned and that it can easily support the significantly higher loads associated with renovation work. He calculates that 30 years ago, façades weighed maybe 60–65 kg/m² but now weigh almost double, so you’re talking about approximately 100–110 kg/m².
This is caused by the increasingly complex façade constructions and their insulation. For example, single glazing became double glazing – and today it’s triple glazing. In fact, in this case the architects recommended not using triple glazing and to accept less insulation in favour of static equilibrium. With a glass thickness of 6 mm, you could therefore save 15 kg/m².

Business as usual during renovation work

surfaces reduced the costs of the interior fittings noticeably.

The hospital will remain operational during both the façade renovations (planned completion — 2019) and the subsequent interior renovations, which will begin on completion of the façade renovations. With its 95% bed occupancy rate, the Münster University Hospital has the highest occupancy rate of any German university hospital —  even a partial closure is completely unthinkable! This is the reason behind DS-Plan’s proposed two-stage renovation plan of first tackling the façade and then refurbishing the interior, which was made possible by the building’s emergency exit balconies, which are not used in the day-to-day operation of the building.

Construction workers working on the balconies will not cause any disruption, as lines of sight can be blocked by the existing curtains. The expected noise pollution was countered by largely dispensing with chiselling and percussion drilling work and instead making extensive use of core drilling. Preliminary investigations showed that the core drilling is an almost noiseless penetration procedure, which can be brought down to a drill hole size of only 8 mm with the appropriate tools.

You have to imagine the bed towers like a stack of biscuits from your childhood, over which an empty cylindrical biscuit packet is to be placed. As you’ll remember with exasperation, this isn’t so easy: If some of the biscuits move, everything tilts and the biscuit tower falls over. The same applies here: A 3D measurement made before the start of the renovation work showed that the balconies were offset vertically from each other by between 82 and 287 mm, i.e. the floor plates had shifted almost 30 cm apart from each other. Haskamp and DS-Plan were asked to develop a façade substructure that allowed the minimum and maximum distances to be bridged in a force-locking manner. Jürgen Einck notes that from an engineering point of view, the detailing of the mini and maxi consoles was naturally the most exciting aspect. But because they weren’t able to plan several hundred thousand individual consoles, it was especially important to develop an interim solution that was to be used for the majority of the façade connections.

The outer shell of the new metal façade consists of curved sheets in which a flat fixed glazing sits. Their baffle discs are surrounded by inconspicuous shadow gaps with louvres. In the area of the railings and the lintels, these are kept quite narrow, while between the glass panes the ventilation grilles are visible as lesenes that structure the horizontally constructed façade. While the narrow horizontal louvres serve above all to naturally cool the façade gap using air convection, to counteract excessive heat build-up in the summer, the prominent vertical openings are essential for the natural interior room ventilation, in other words when an inner window is opened.

Jürgen Einck recommends cleaning metal façades at least twice a year — and preferably more often. For a façade that functions over the long term, he also advises getting Facility Management involved at an early stage. If fully maintained, he sees a lifespan of 35 to 40 years for a modern façade as more than realistic. On the other hand, he rejects the idea promoted by glass companies that glass should be replaced after around 20 years.
In addition, however, structural measures for passive façade protection have also been implemented for the bed towers at the Münster University Hospital: For example, inconspicuous weather boarding on the elements has been created, which reduce the drip flags on the matte façade sheeting; vertical steel strands (pigeon spikes) were also fitted to prevent nesting in the recesses of the façade. 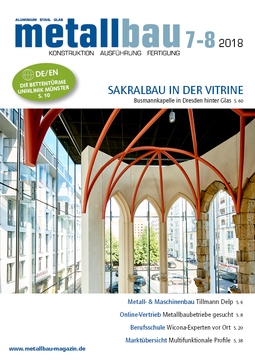 Icon in white at Breitscheidplatz

The 119 metre high Upper West tower at Breitscheidplatz, Berlin represents a new angle on urban development  despite its sinuous white curves. The building is expected to be complete by the summer;...