The Henninger Turm was built on the former land of the Henninger brewery in the Sachsenhausen district of Frankfurt – it is a 140-metre-tall tower built to the plans of architects Meixner Schlüter Wendt with living accommodation, a restaurant and commercial space. A tower with a cylinder on top, its shape is reminiscent of the building that once stood in its place serving as a landmark for the town. The original Henninger Turm was built in the 1960s and, at 120 metres high, was for a long time the tallest tower block in Frankfurt. It stood over the Sachsenhausen district for more than half a century.

Actris Henninger Turm, a company from Mannheim, finally acquired the area and at the end of 2017 established the new tower containing 150 luxury apartments. At 140 metres high, it is one of the tallest residential buildings in Germany. The base contains a small shopping centre with shops, a pharmacy and a fitness studio. A newly designed “beer barrel” with viewing platform and restaurant rest on the residential tower, though this one does not revolve.

Architects Claudia Meixner, Florian Schlüter and Martin Wendt designed a truly unique building envelope, for which special structures were required. The façade is often called “pixel façade” as a result of the heterogeneous building envelope that reflects the diversity of the living space lying behind it. It is a juxtaposition of punch windows and the façade elements of the exterior winter gardens. In between are the rear-ventilated, natural-stone façades made from anthracite-coloured “Nero Assoluto” from Africa. The light rear of the Northern side of the tower was made using Croatian “Plano” limestone. The fully glazed sides in turn use their visibly chaotic loggias and balconies to create a pixelated effect. But this is only how it appears, as lots of individual parts were custom-designed for each apartment. The wide variety of homes is reflected in the image of the façade. And then there’s the barrel – as everyone involved in the construction of the tower called the cylinder placed on top, which in Karl Emil Liesen’s original building served as a grain silo. This is encased by an element façade that is also fully glazed with curved windows.

Rupert App, a steelwork, metal and façade contractor from Leutkirch in Baden-Württemberg, was responsible for the entire façade construction, i.e. everything that can be seen from the outside. App already had some high-profile references in its portfolio, such as the Porsche Museum, the German Federal Chancellery and the Zoofenster Waldorf Astoria Hotel in Berlin, but with an order totalling around 45 million euro, nothing as big as the Henninger Turm project. A total of five construction managers and around 40 to 60 fitters were in the Allgäu-based bid, including senior construction manager Werner Dobler and project manager Bernd Maurus. Both have already completed their technician training at App and in the meantime have clocked up almost 40 years in the team there, which contains around 300 employees.

With a project of this size, the challenges are both significant and many: For Maurus, the biggest challenge as general contractor for the façade was keeping track of all the subcontractors and co-ordinating interfaces. “Our responsibility covered many areas, including fitting of the natural-stone slabs, thermal insulation, all seals, cladding and paving on the balconies”, says Maurus. His colleague Werner Dobler tells us more: “We weren’t dealing with a uniform façade. All the windows, for example, were made just for the tower by us in our plant. The architects had given us virtually no tolerance in the manufacture. Everything had to be seated exactly. The work required millimetre precision.”

But the architects also faced great demands prior to this, particularly with regard to noise insulation. As the crow flies, the plot is only around ten kilometres away from Frankfurt Airport. The 500,000 planes that take off and land there every year generate a lot of noise. This noise is of course not in keeping with luxury apartments, so the façade constructors developed a special design for an electrically driven parallel vent window with triple glazing and seals made of foamed neoprene, which would guarantee a high level of noise protection even when the windows were open. App developed a new construction for this using complicated safety mechanisms to avoid potential accidents.

A tower façade poses particular challenges to those responsible for it: wind and transport logistics being just two of them. “We used mast climbing work platforms to transport all parts of the façade. The higher they had to go, the more difficult they were to transport, as we had to fit everything from the outside”, says Maurus. The construction managers had to constantly bear the wind in mind as well. At two to three-and-a-half metres in size, the windows were already at the limit for such installations at a height of 140 metres, where the wind is very strong.

The practical implementation of the design required the especially high requirements in terms of glass production and manufacture of the 5130 individual elements and their installation in the building to be taken into account. The flat windows for the tower were manufactured in Radeburg. There are lots of different shapes and glass types, meeting all the requirements for fall protection and protection against the sun, heat and sound. The sun protection is supported by exterior screens in the base and internal Verosol materials in the apartments.

To define the glass quality for the curved windows in the barrel, architects, building owner, façade planners and metal contractors examined 1:1 reference samples together at the processor in Berlin. Those responsible for the project placed the utmost value on a brilliant appearance and distortion-free view through the insulated glass.

The agreement reached was on a glass specification of triple insulating glass with multiple-walled laminated glass-float combinations. Cylindrically curved glass was used. It was preassembled at the façade constructor’s, partially adhered in the structural glazing process and then suspended by crane at the construction site as a finished element 500 kilograms in weight in part, aligned by hand and installed.

After 16 months of façade construction, now only a handful of remaining tasks need to be completed. A lot is still being built on the site itself. With regard to urban densification, the Henninger Turm is just one “building block” among many. Alongside are several five-storey urban villas with 110 housing units. But it’s not cheap to live there; on average, future property owners will need to fork out EUR 5,500 per square metre. In the tower itself, the average is a staggering EUR 6,500 per square metre. The higher you go, the more it costs.

The semi-public viewing platform, on the other hand, is free to use. Those visiting the panoramic restaurant can cast their gaze across Frankfurt from the new landmark. The tower ranks 18th in terms of Frankfurt high rises. And Frankfurt residents associate the new building with a traditional symbol of their cityscape. 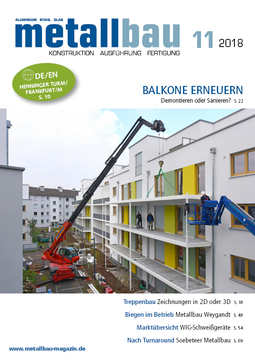